Is a number more than the sum of its’ digits? How digits influence number estimation.

What is a number? Numbers, like words, can be used to represent a variety of different things: the cost of a new suit, the distance until you get to your friend’s house, the time it will take you to get there, the amount of sugar you add to your cookie recipe. The use of numbers to represent costs, distance, time, amounts, and weights can all be linked through the concept of magnitude—the size of a number relative to other numbers.

If you are thinking about numbers between 0 and 1,000, is 498 much different from 502? No, these numbers are both about 500. Even though 498 and 502 are made up of completely different symbolic digits, you understand that both numbers have a magnitude of about 500. For example, if you are planning a road trip, you know that 502 miles is not much different from 498 miles.

If people base numeric estimates on magnitude, then numbers like 498 and 502 should be estimated at similar locations on the number line within the 0 to 1,000 range (e.g., near 500). However, if people are biased by the digits that make up the number, then they may estimate numbers like 502 as being larger than 498 because 5 is greater than 4. That is, they will consistently place numbers like 502 further to the right on a number line than numbers like 498. In other words, adults might focus on the leftmost digit (5 and 4) instead of considering the magnitude of the number presented (about 500).

To evaluate whether children and adults’ estimates were influenced by either “hundreds” or “fifties” digits, Lai and colleagues (2017) created different number pairs that were close in magnitude but differed in the digits that represented them. For hundreds pairs, numbers with essentially the same magnitude differed in the hundreds digit (e.g., 498 and 502). For fifties pairs, the fifties digit differed (e.g., 348 and 351). Participants estimated the magnitude of numbers between 0 and 1,000, one at a time, on number lines with labeled endpoints (see Figure 1).

Will people make different number line estimates for numbers with similar magnitudes but different digits? The authors expected children and adults to be affected by the hundreds digit, but not the fifties digit when estimating numbers similar in magnitude (e.g., 498 and 502). This prediction was based on marketing research suggesting the leftmost digit influences the comparison of prices (1). For example, $4.99 and $5.00 are estimated as more different than $4.49 and $4.50, even though they are both only 1 cent apart.

In both experiments, most children’s and adults’ estimates were influenced by the hundreds digit but not the fifties digit. People estimated numbers like 502 as larger than numbers like 498. That is, they placed them further to the right on a number line (see Figure 2 for an example). However, their estimates of numbers like 351 and 348 were placed similar locations on the number lines. The effect of the hundreds digit on perceived magnitude was smaller for older participants but was still present in adults. 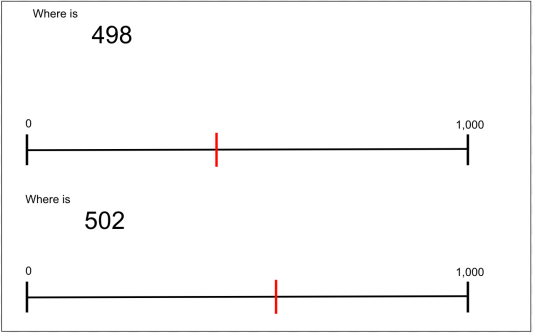 A number can be used to represent a variety of different things. In turn, numbers are represented by the symbolic digits that compose them. It is no surprise then that the digits that are used to represent numbers influence how people think about them. Lai and colleagues (2017) demonstrated what marketing researchers have known for years: the leftmost digit influences how people think about the size of numbers. What is less clear is why we have this bias.

Does this bias have to do with the way a multi-digit number is composed and that we read from left-to-right? For example, four-hundred and ninety eight is composed of 4 one-hundreds, plus 9 tens, plus 8 ones. This composition likely influences the strategies people use when they are estimating the magnitude: 498 = four-hundred + a lot, but 502 is 500 + a little.

Now you can strategically use numbers in your own life. When an anxious car passenger asks, How much longer? Are we there yet? Tell them 2 hours and 55 minutes instead of 3 hours. Want to emphasize how much money you saved on a suit that was on sale for $498? Tell your friend it was four-hundred and ninety-eight dollars rather than about $500; they might only focus on the four-hundred. But, if someone tries to do the same to you, you’ll know: it’s $500.