Fake It ‘Til You Make It: How Pretend Play Influences Inhibitory Control

Children often engage in pretend play, sometimes enacting realistic depictions of life or even delving into fantasy worlds of dragons, mermaids, witches, fairies, and all of the beauty of the fantastical. This is certainly an exciting endeavor. However, some scientists are beginning to wonder how these pretense activities impact children’s cognition. One aspect of cognition which researchers believe may be influenced by pretend play is inhibition (1), which refers to the ability to hold back spontaneous or automatic behaviors. This skill belongs to the wider cognitive skill of executive function (2), which refers to our behavioral and emotional self-regulation.

The researchers recruited 60 typically-developing American three-year-olds for their investigation.

All 60 of the children listened to an experimenter tell a story while they sat next to a storyboard. The children were asked to place felt cutouts which related to the story, such as characters and objects, onto the storyboard to match the plot as the experimenter read the story.

To investigate whether the level of fantasy in the story would impact the child’s inhibition abilities, the authors split the 60 children into two groups. In the first group, the experimenter read 30 of the children a fantasy story about Planet Opposite, which broke many of the rules of our reality. For example, butterflies could swim and fish could fly. In the second group, the experimenter read the other 30 children a realistic story about Funtown, which had a similar plot to Planet Opposite but did not break reality’s rules: the fish swam and the butterflies flew.

To investigate whether engaging pretend play compared with non-pretend play would increase inhibition abilities, the researchers further split each of these two groups in half, creating four groups in total. Fifteen of the children who listened to Planet Opposite, and fifteen of the children who listened to Funtown were encouraged to pretend as they placed the felt cutouts of characters and objects onto the storyboard. These children were told to act as though the story was occurring on the storyboard by making the felt cutouts of characters “walk” and “talk”. The experimenter demonstrated how the children should use the felt cutouts while they read the second page of the book.

Meanwhile, the other fifteen children who listened to Planet Opposite, and the other fifteen children who listened to Funtown were encouraged not to engage in pretend play. They were told to just place the felt cutouts of characters and objects onto the storyboard to match the story. The experimenter also demonstrated how the children should use the cutouts while they read the second page of the book. For clarity, the way in which children were split into groups is outlined in the figure below: 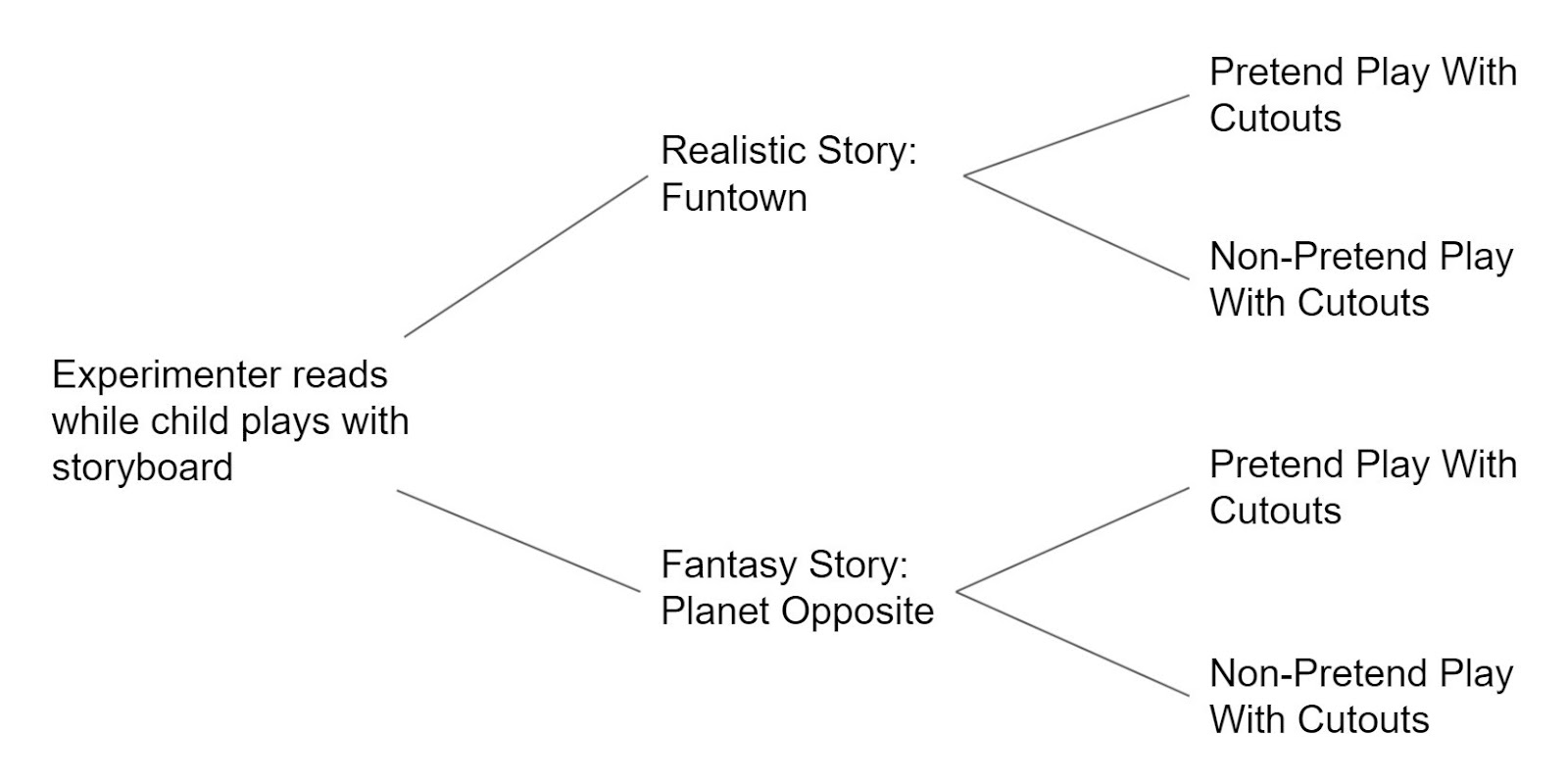 How Children Were Split Into Groups

In total, this created four groups, each with fifteen children.

Immediately following the storyboard activity, the experimenters measured the children’s inhibition using the “Less is More” task. In this task, children sat at a small table, on top of which sat two bowls of candy. One bowl contained five pieces of candy and the other contained only two pieces of candy. The experimenter used the child’s favourite of two candy types for this to ensure that they wanted the candy from the bowls. The children were then shown Chris, a naughty monkey puppet. They were told that whichever bowl they pointed to would go to Chris and that they would receive the other bowl of candy. Therefore, in order to get the preferred larger bowl, the children needed to inhibit their natural response to point to it and point to the smaller bowl instead. This task was repeated sixteen times and the children would receive a point every time they pointed to the bowl with fewer sweets. The higher their score out of sixteen, the more successful they were at inhibiting their natural response to point to the larger bowl. 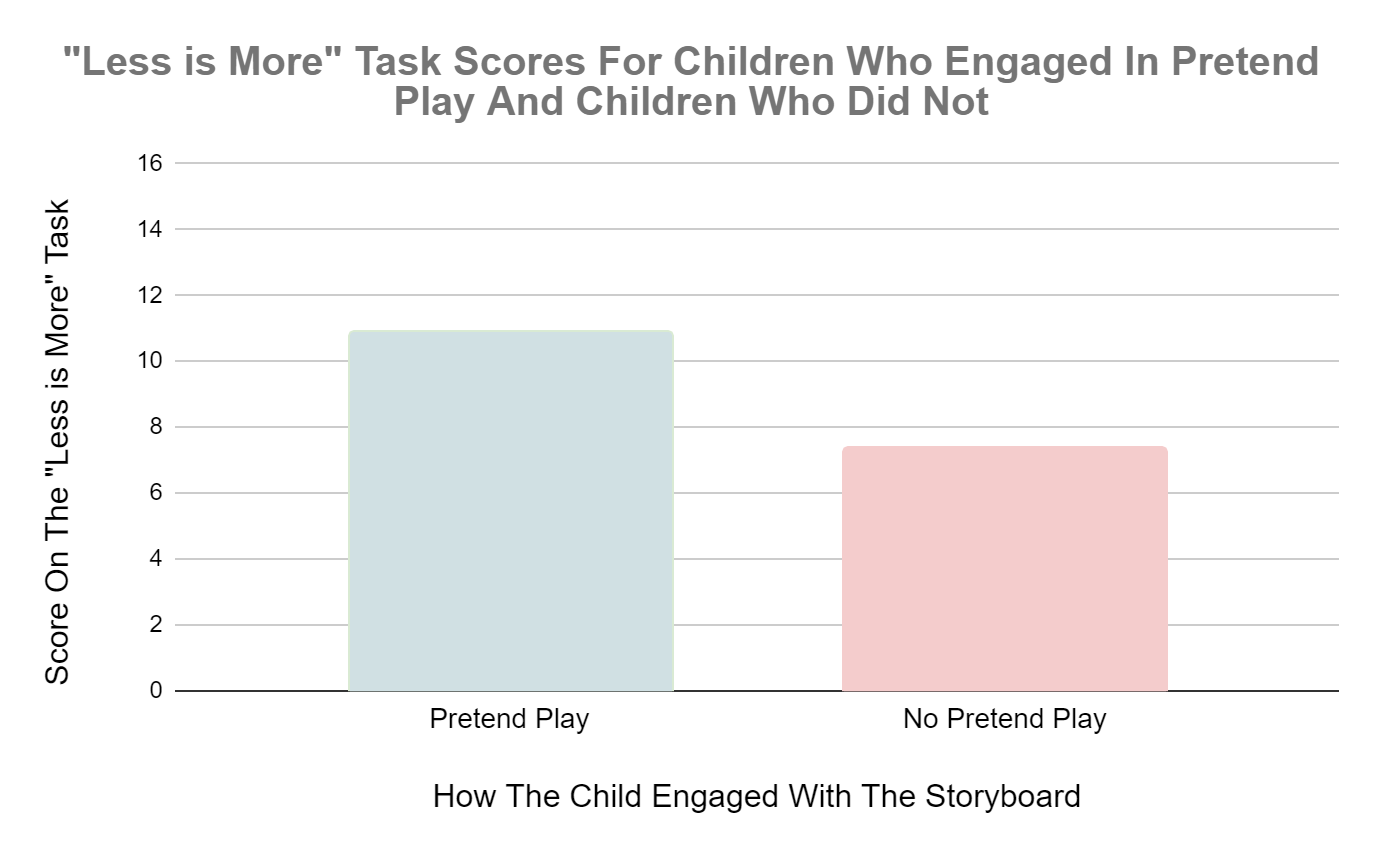 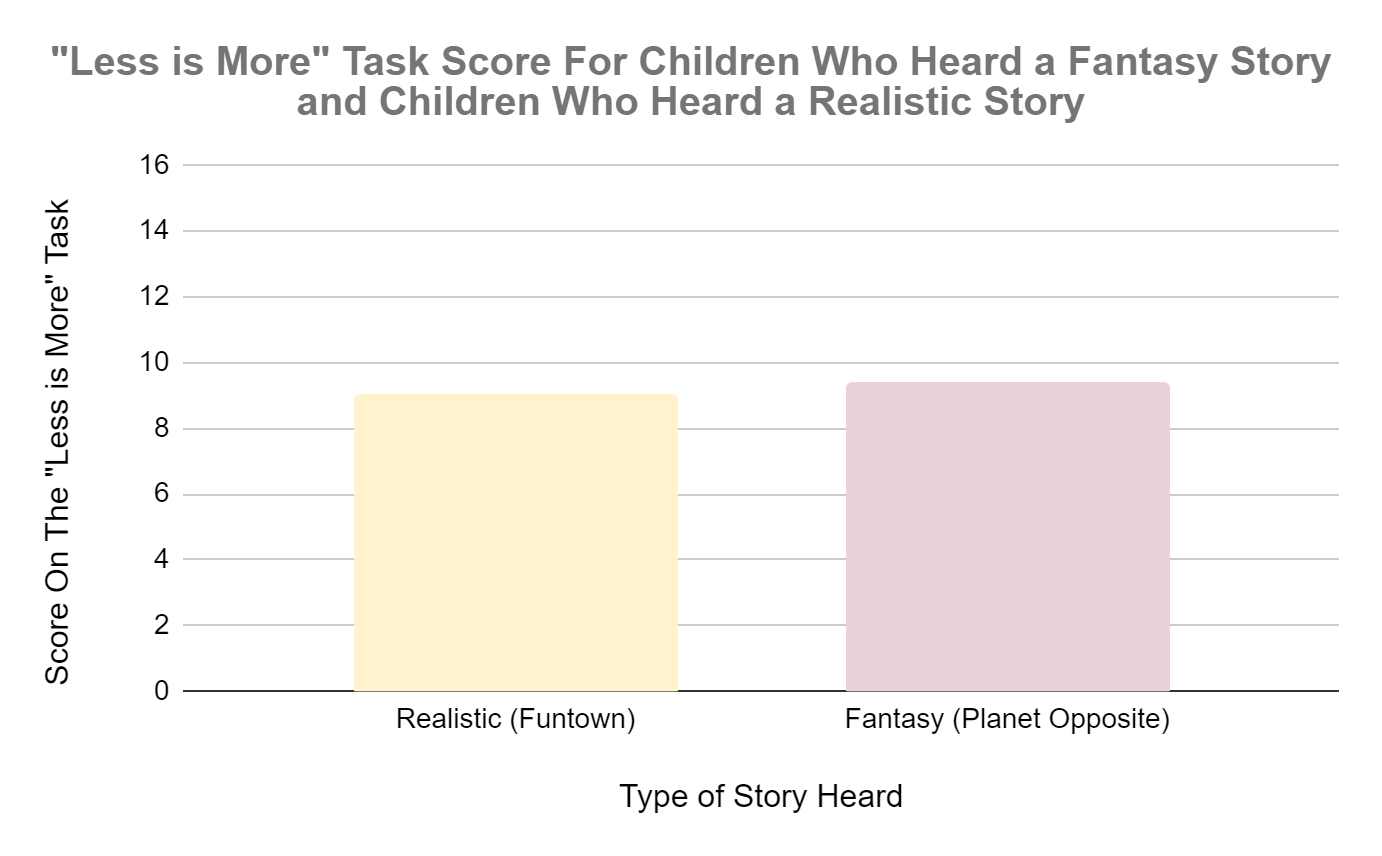 Bar Chart Depicting “Less is More” Task Scores For Children Who Heard a Realistic Story and Children Who Heard a Fantasy Story. There was no meaningful difference in inhibition scores on the “Less is More” task between children who heard the realistic story about Funtown, and children who heard the fantasy story about Planet Opposite.

What These Results Mean

The researchers demonstrated that engaging in pretense improves inhibitory control regardless of the format (realistic or fantastical). But why does this improvement occur? Previous researchers have suggested that pretend play allows children to move beyond the confines of their physical environment and to psychologically distance themselves from said environment (3, 4). Perhaps pretend play promotes flexible thinking, which benefits inhibitory control.

Future research should investigate how pretend play improves inhibition, and how the cognitive impact of pretend play may change with age. As with any research, limitations of the current investigation provide additional avenues for future work. For example, their sample size was relatively small – only fifteen participants per group – and they only used one measure of inhibition. Accordingly, future research could replicate the present experiment with a larger sample and multiple measures of inhibition and other types of cognitive control. Furthermore, future research should attempt to promote pretend play in environments that are more realistic for children, rather than by placing items on a storyboard to match a story. An example of this could be roleplay with toys.

Overall, the researchers presented intriguing evidence that pretend play may benefit our cognitive abilities. Furthermore, they outlined that whether this pretense explores reality or fantasy does not influence this benefit. Although further research is required to truly understand how pretend play improves inhibition, it seems safe to say that pretend play is beneficial for development, so encourage your children to swim with some mermaids or slay some dragons.